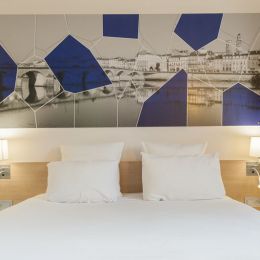 The Brit Hotel Mâcon Centre Gare is located in the city centre and close to the ...

Offers and Promotion
Let's go
Hotels
near the hotel
From
€44,00
Confort 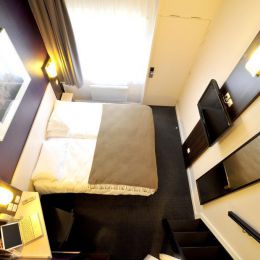 Your stay in Mâcon

Book your hotel in Macon and enjoy all the attractions of the city:

- The Pont Saint-Laurent is one of the few bridges not to have been destroyed during the Second World War. It is composed of 12 arches.

- Saint-Pierre church: built at the end of the XIXth century and of Romanesque style, it is composed of two bell towers and forms a remarkable architectural ensemble.

- Apothecary of the Hotel-Dieu: discover a very nice building with woodwork of the 18th century.

- La Maison de Bois: its construction dating from the end of the 15th and the beginning of the 16th century, it is the oldest house in the city of Mâcon.

- The Ursuline Museum: built in 1675, this former convent was also used as a prison and military barracks. Prehistoric, Gallo-Roman and medieval excavations are now presented here.

Macon will also delight lovers of good cooking with a few specialties famous in the region, such as: snail, Bresse chicken (the only poultry in the world to have an Appellation d'Origine Contrôlée), AOC cheese Mâconnais goat cheeses, Mâcon waffles with delicious aromas of caramel, lemon and vanilla. Many activities will be at your disposal during your stay in Mâcon. Walking or cycling, wine tasting, cultural visits ... Everything is possible in Macon!

Do not wait any longer and book your Brit Hotel in Macon now!