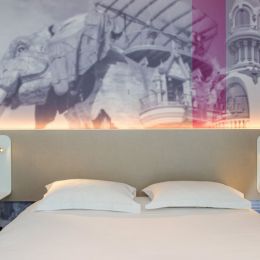 The Brit Hotel Nantes Beaujoire - L'Amandine is a hotel/restaurant located in fr...

Restaurant
Complete hotel
tonight
I reserve for another date
Confort

The Brit Hotel Nantes St Herblain - Le Kerann is a hotel/restaurant near Nantes,...

Restaurant
Complete hotel
tonight
I reserve for another date

Offers and Promotion
Let's go
Hotels
near the hotel
From
€77,00
Confort 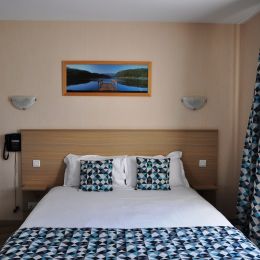 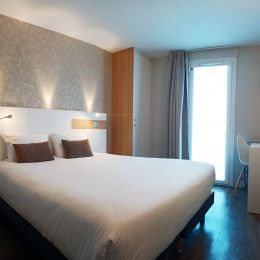 Which is the closest hotel to La Beaujoire stadium in Nantes?

The Brit Hotel Nantes Beaujoire is located right next to the Beaujoire stadium (5 min. walk).

Which hotel has a swimming pool in Nantes?

Which hotel is the closest to Nantes train station?

The Brit Hotel La Beaujoire Amandine is the closest to the Nantes train station (15 min. by car).

Which hotel in Nantes accepts animals?

Our 3 hotels in Nantes accept animals (for an extra charge).

Which is the closest hotel to the CHU Laënnec in Nantes?

Your stay in Nantes

Nantes, the city of the Dukes of Brittany, is located in the West of France, about fifty kilometres from the Atlantic Ocean. Nantes is the capital of the Loire region and a dynamic city with just over 270,000 inhabitants. “Voyage à Nantes” offers an 8.5 km urban route to discover the most beautiful monuments of the city in thirty stages.

Nantes is a green city that offers "nature and culture" tourism. On the one hand because the city offers a large number of parks and gardens that extend over nearly 215 hectares and 800 km of cycle paths provide an environmentally responsible way of exploring the city and the Nantes metropolitan area. And on the other hand, because the city is known for its original art exhibitions. The cruises on the Loire Estuary between Nantes and St Nazaire offer evidence of this. This exhibition is an open-air collection extending over 60 km. It includes works of art by internationally renowned artists. The “Machines de l’ile” is the second staple of the city of Nantes. It is a unique art project led by machinists who will work for the delight of young and young-at-heart. There are huge machines including the Great Elephant.

The Castle of the Dukes of Brittany is the main monument in Nantes first because it has been listed as a historical monument since 1840 and second because it presents original exhibitions. It consists of a defensive wall built in the 15th century and several buildings built between the 14th century and the 18th century.

If you are a fine wine lover, discover the cellars and wineries in the area where many workshops are organized, including a wine-making workshop. Similarly, at the Nantes Vineyards Museum you can increase your knowledge of the wine-making process and retrace all stages of raising and harvesting grapes. Discover the region’s culinary specialities including the “Gâteau Nantais” (cake) and the famous White Butter Sauce. +

And if you want to explore the area’s surroundings, make sure you get the guide “Les 23 Petits Voyages” it is useful to have in one’s pocket for exploring the towns around the Nantes metropolitan area.