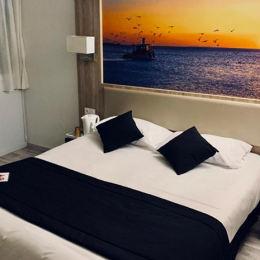 Brit Hotel Confort Morlaix is located 3 km from the city centre of Morlaix. The ...

Offers and Promotion
Let's go
Hotels
near the hotel
Confort 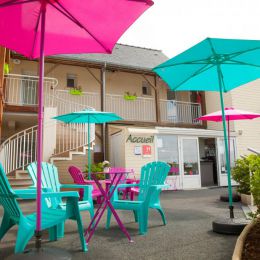 The BRIT HOTEL in Lannion / Perros is ideally located (10 minutes from Lannion c...

Opening hours of the receipt

quality Tourism
Complete hotel
tonight
I reserve for another date

Your stay in Morlaix

Book your hotel in Morlaix and discover the city with three hills.

The medieval city of Morlaix reveals its rich heritage through its narrow and picturesque streets, its half-timbered houses but also its alleys and steep stairs.

Discover its viaduct, the house known as the Duchess Anne's house and the Pondalez house.

In addition to its architectural heritage, Morlaix also has a former commercial port, now transformed into a marina, which is located a stone's throw from the town centre. This port was formed around the convergence of two rivers which flow from the Mont d'Arrée, the Queffleuth and the Jarlot.

The town of Morlaix was marked by the activity of privateers in the 18th century and the trade in goods such as linen and tobacco and you can still see the tobacco factory which produced snuff, chewing tobacco and smoking tobacco.

Morlaix offers rewarding walks through the many pedestrian streets and terraced gardens in the heart of the old town.

When it comes to activities, the choice is vast. Go for a bike ride, a walk, a game of golf, a boat trip... Or play Bowling Le Corsaire with your family!

Discover this city with its many tourist treasures. Book now your room in our hotel in Morlaix.